Here is a short video clip of my setup for printing woodblock prints. The work is being done on the bed of my very old Vandercook Model 01 proofing press...probably built back in the 1940's or 1950's. It may not be clear in the first video clip but for printing the block is prop up on a downward angle against the edge of the press to aid with the printing posture.
Make sure to leave me a comment if you have any questions or if you have some recommendations for improvement.

This next clip shows me proofing the first impression for a background color. (Note wherever I mention the word "ink" I am really referring to color pigments of the watercolor variety).

Posted by Julio at 6:43 PM No comments: Links to this post

The International Fine Print Dealers Association's (IFPDA) annual show, Printfair 09 in New York is considered to be one of the largest and finest in the world. The show ran November 5-9, 2009. See a full show review including photos and print prices.
Note. The Art of Japan offered a superb selection of color woodblock Orientalist prints, including two works by Hashiguchi Goyo; "Woman Applying Makeup" from 1918 that was priced at $39,500, and "Combing Her Hair" from 1920 that was marked $79,500.

Make sure to visit the IFPDA's What's On page to see a list of worlwide exhibits and workshops featuring fine prints & printmakers.

Posted by Julio at 5:00 PM No comments: Links to this post

For my latest print I wanted to include some of the traditional Japanese techniques. Here is the background block which will later be used for three more impressions. Note the traditional kento registration marks. Image size is about 3 X 9.5 inches. 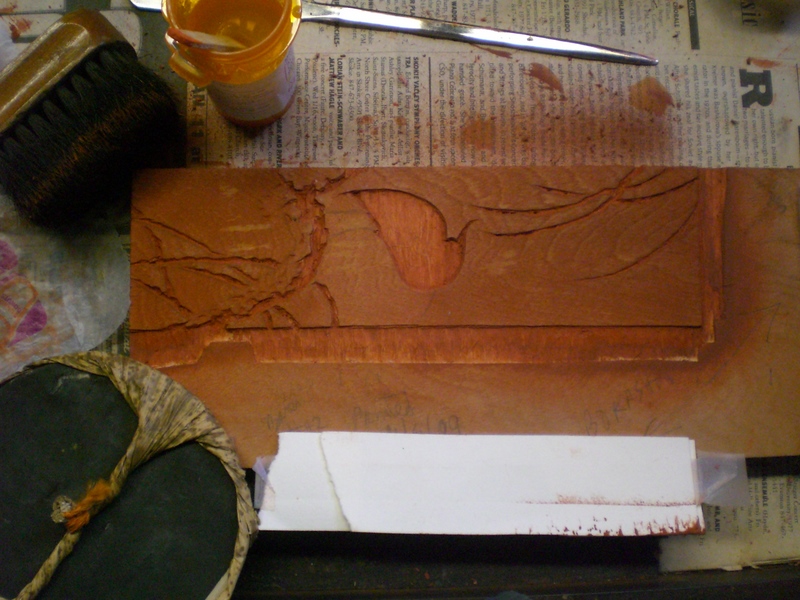 The first color impression shows a very beautiful wood grain pattern for the background color. The block is made of birch plywood and Japanese hosho was the paper selected for these prints. 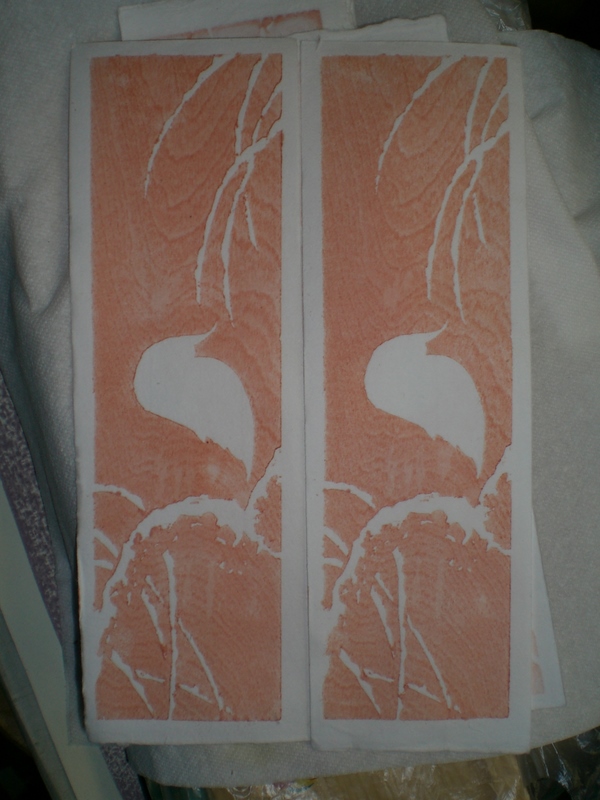 The baren flattens out the paper in the color areas leaving behind whites areas with a light embossing (karazuri) effect. Actually what we are seeing is the natural thickness of the paper ! 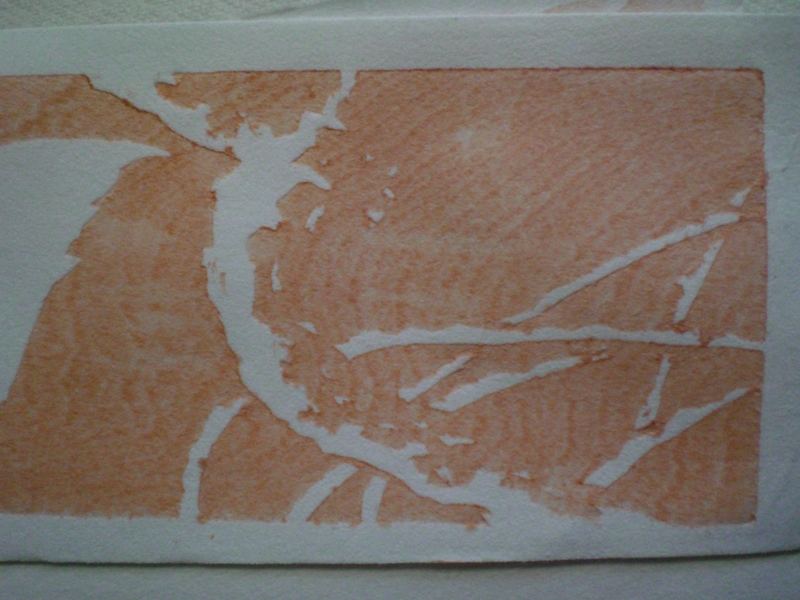 For the next impression I tried a "double" gradation (bokashi). Using the same background block as before a little pigment and paste was applied to both the top and bottom of the block. First I brushed in the gradation at the bottom of the image (pigment area on brush toward the bottom) then carefully turning the brush around (pigment area on the brush now towards top) I brushed on the gradation at the top. Proper brush alignment is key during gradation to keep the paste and pigment areas from messing up. The impression was then taken with the baren. Although not traditional the white cardboard pieces are used to keep the edges of the print smudge free, they flip out of the way while applying color to the block and then flip back in place just before placing the paper on the block. 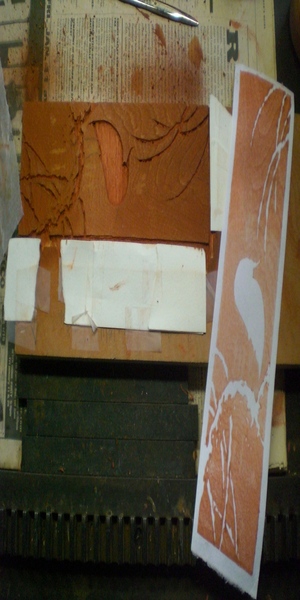 Here is the before and after photo for the "double" bokashi. 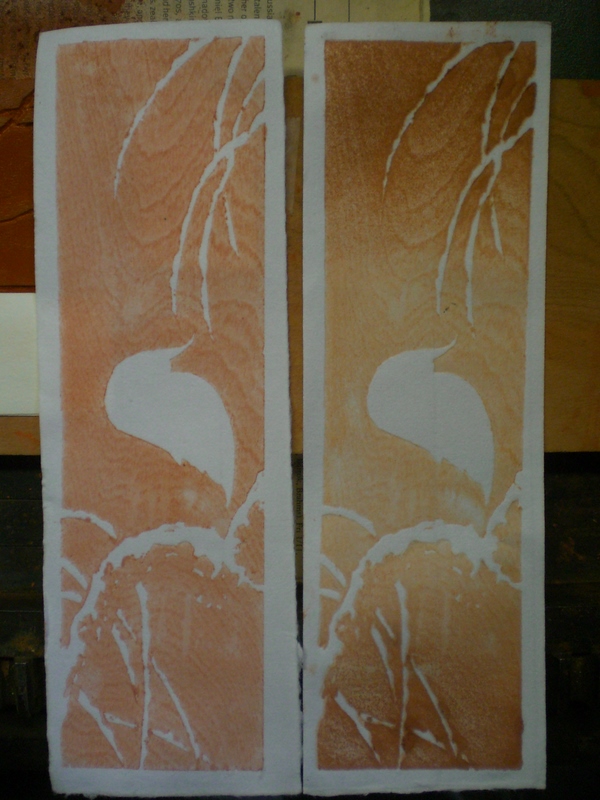 Proofing for the desired amount of bokashi turned out to be as tricky as getting the same results on every print. Eventually I settled on one of the darker tones near the right of the photo. In case you are wondering the sharp metal tool in the photo was used to cleanup the small crevices from accumulated pigment. 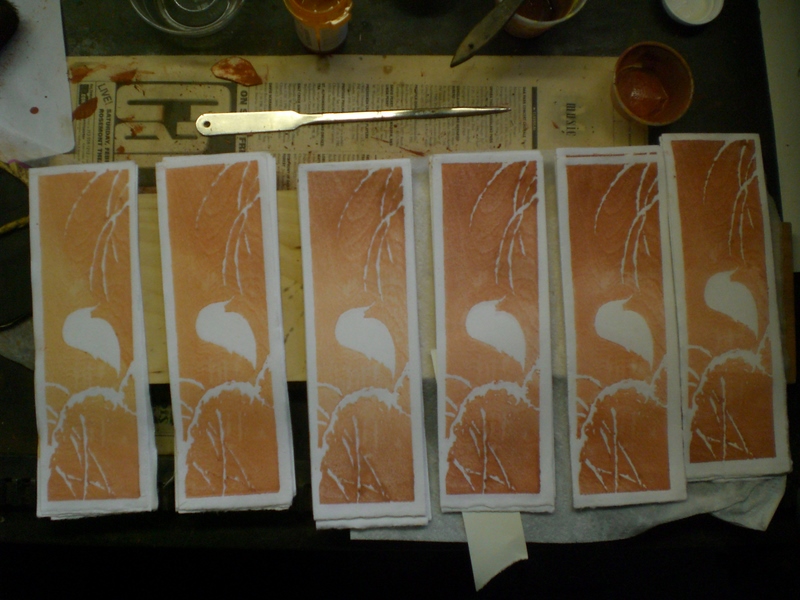 A third and darker gradation was applied at the top of the image for additional contrast. 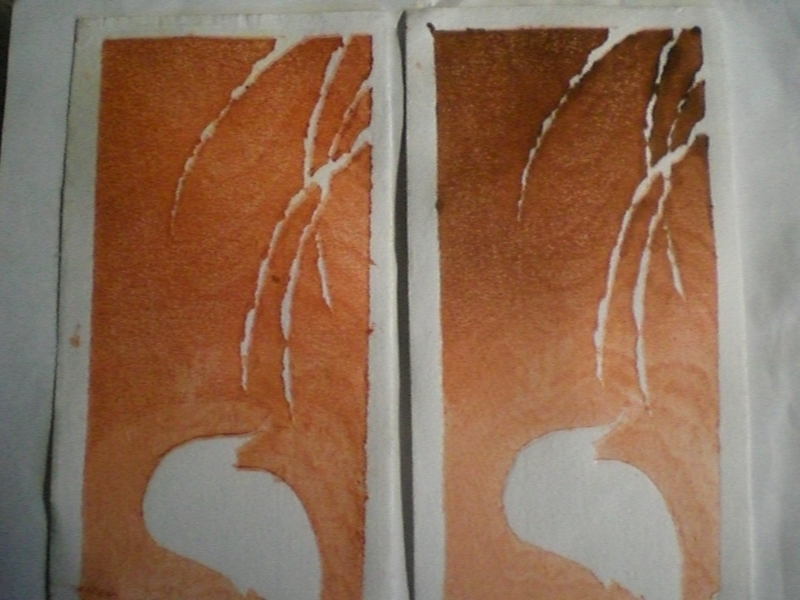 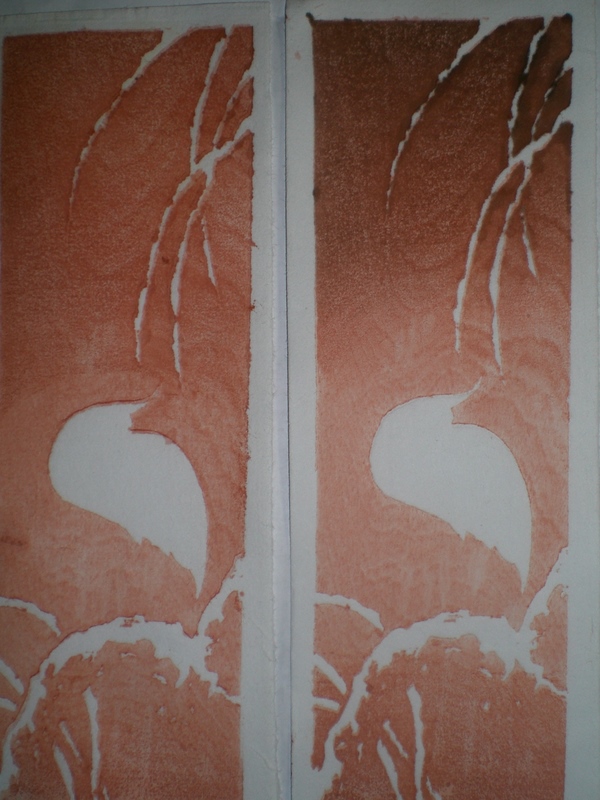 The key block was next and a black/blue tone was used for the branches, tree trunk and legs. Not happy with the original heron beak I had carved it was removed from the block and I went ahead printing what you see here. 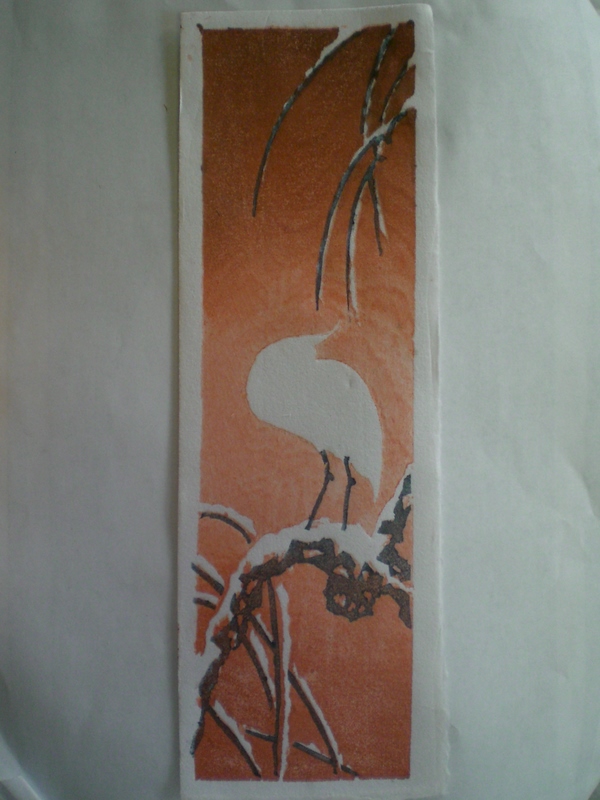 Then the final color impression for a new beak and eye. 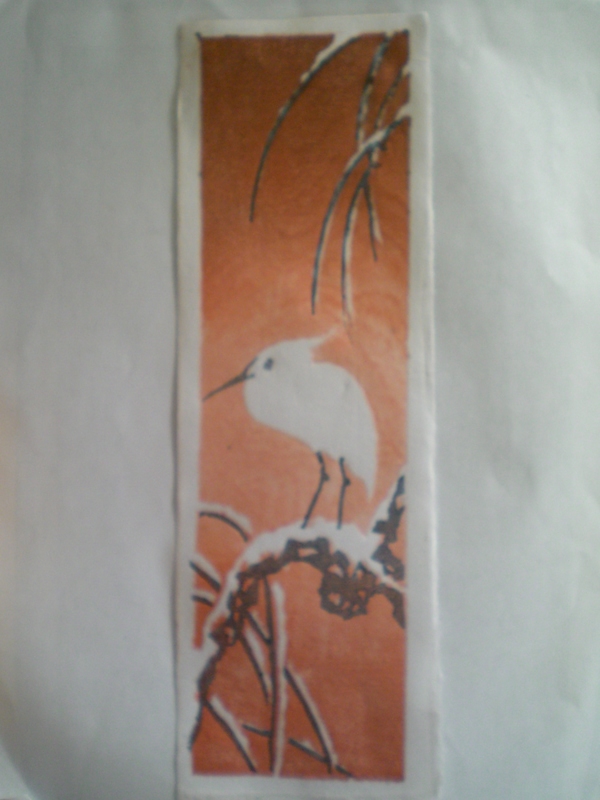 For the last impression no color was used. The still moist prints were placed back on the now dry background block and heavy embossing (kimedashi) was obtained by carefully pushing the paper into the carved out crevices (tree branches, trunk and heron body). The moist paper expands and takes the shape of the carved out area. The tools I used for pushing the paper were a popsicle stick and for tight spots the tip of a golf tee. This last photo shows the verso side of the print. Note the feather and wing pattern on the heron's body. As the paper dries the embossing remains. 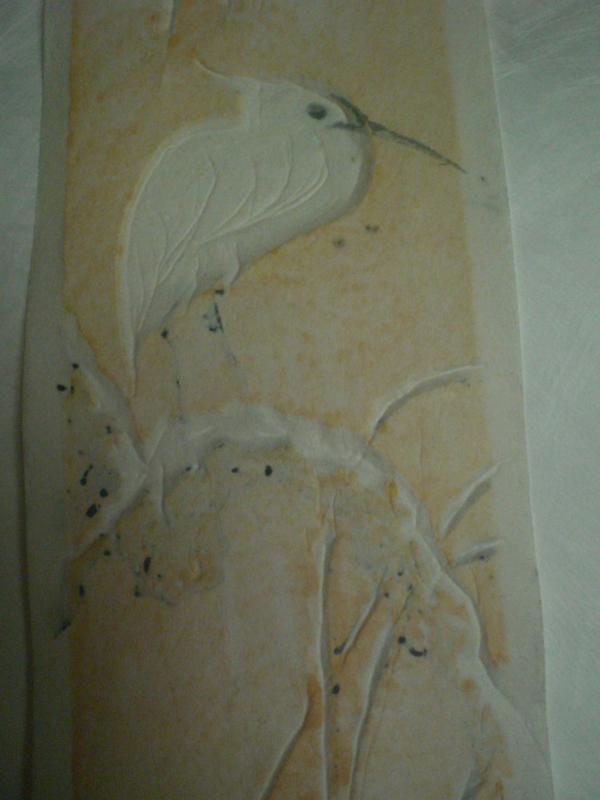 Thanks for checking out my work.....Julio
Posted by Julio at 4:09 PM No comments: Links to this post

Came across the website of this Italian printmaker who works under the pseudonym of Ligustro and was born in Imperia (Italy) in 1924. Since 1986 he has dedicated himself exclusively to the study of Japanese coloured woodblock printing and the Nishiki-e techniques in use during the Edo period, creating hand-prints on highly prized paper produced in Japan using traditional craft methods. He gives lectures and practical demonstration to bring this artistic technique and its fascinating history to the general public.
The main website is here: http://www.ligustro.it/
Here is a link contributed by David Bull with more information and larger images: click here for more images . Right click to download pdf. 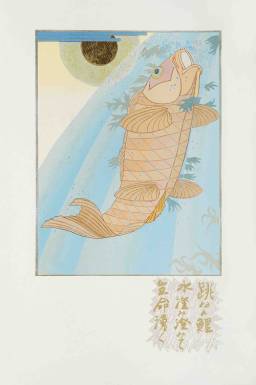 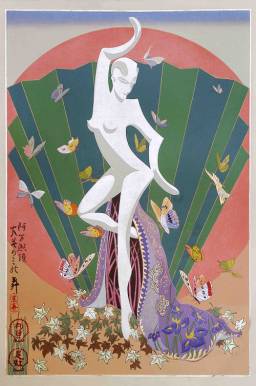 Posted by Julio at 3:03 AM No comments: Links to this post

Email ThisBlogThis!Share to TwitterShare to FacebookShare to Pinterest
Labels: Stories

Not quite. Earlier this week while switching channels late at night I randomly tuned in an "adult" theme movie....to my surprise hanging in the background was a print by Paul Jacoulet..."The Miraculous Catch" from 1939. A cameraman's closeup of the couple making wild love framed the print just so that it looked like these guys were 'enjoying' the show. I laughed and could not help think if Mr. Jacoulet would have approved and if he had a good sense of humor ?


Anyway this lead is a good excuse to post these photos of Jacoulet taken in January 1946 by famous photographer Alfred Eisenstaedt for Life magazine. 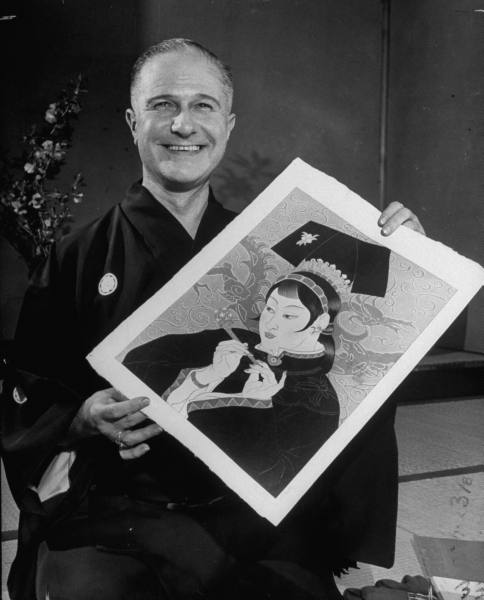 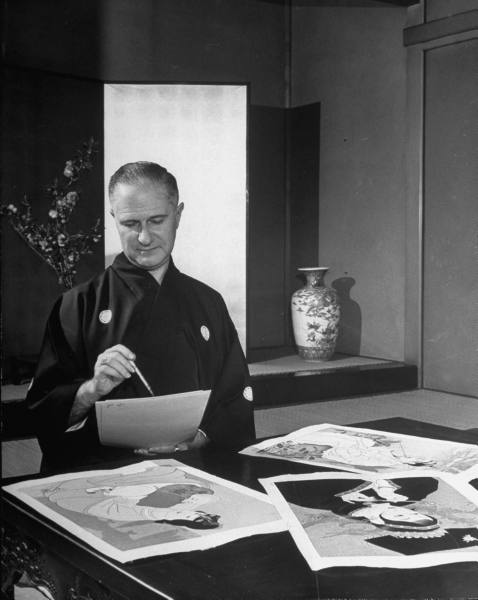 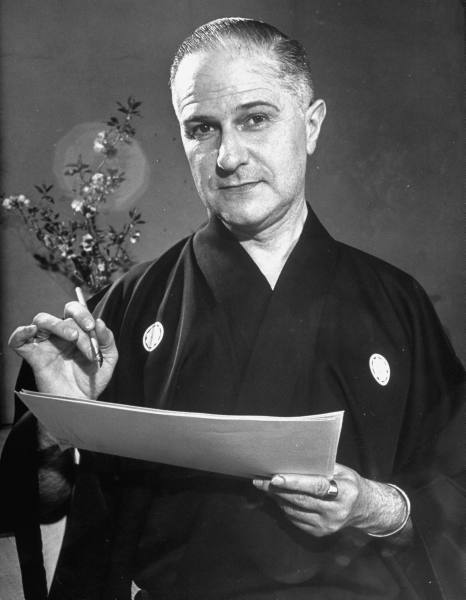 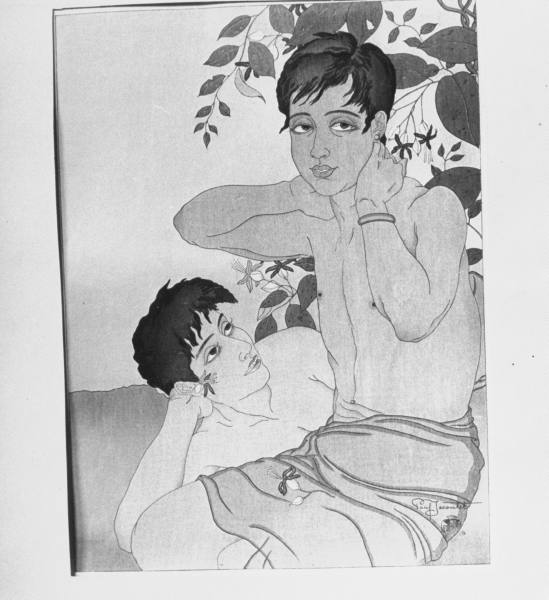 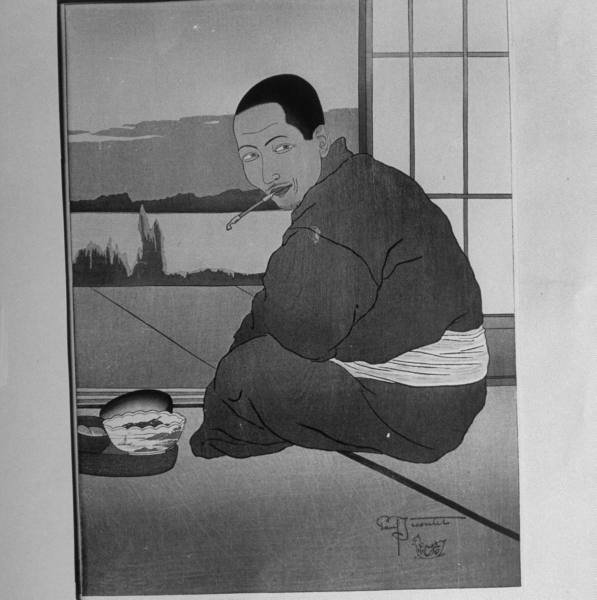 Posted by Julio at 3:07 PM No comments: Links to this post