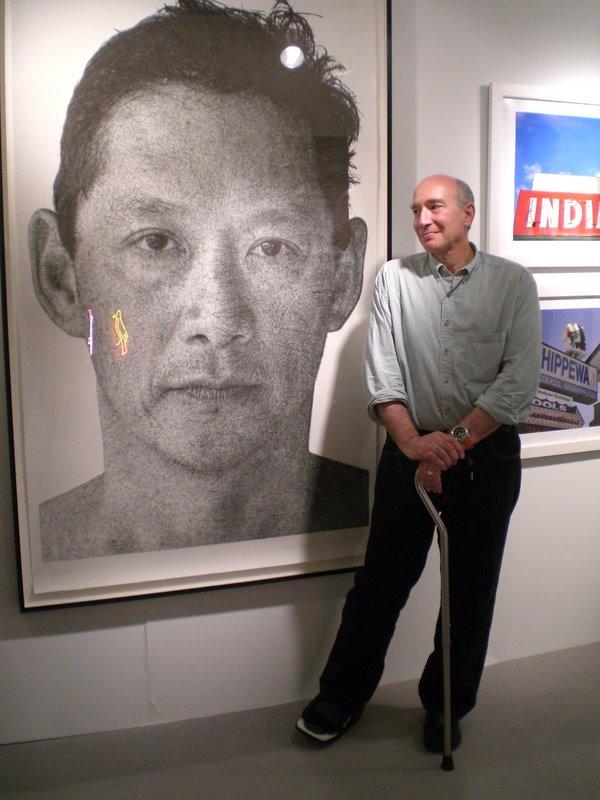 This past Sunday I attended Art Chicago 2007 . The show makes it's home at Chicago's famous Merchandise Mart and is truly an international event with over 30 participating fine Art galleries from Europe, Canada and Asia and over 100 American galleries. Under the umbrella of "Artropolis" it was one of several Art shows running concurrently in one location. So much to see and so little time !
It was great to meet up again with Mike Lyon and his wife Linda who flew in from Kansas City for the show and visit with their son Andy. Sherry Leedy Contemporary Art Gallery from Kansas City which represents Mike brought along two of his more recent (and very large !) pen and ink drawings ("Rick" and "Anthony").
My wife Maria and I met up with the Lyons and after a most needed lunch we had a great time visiting the galleries and talking shop. Mike was a real trooper getting around with little problem just days after getting his cast removed (torn achilles tendon surgery !). I for one had trouble keeping up with him !
This was quite an upscale show with price tags to match...such prices ! A few of the works we inquired about were in the $50,000 to $250,000 range. Among my favorite artists on display were works by Chuck Close, Andy Warhol, Alex Katz, Wilfredo Lam (Cuban master), Colombian Fernando Botero and of course our very own Mike Lyon.
Click on any of the images for a larger view, more photos below...

From Left: Mike and Linda, their son Andy, Julio and Maria Rodriguez 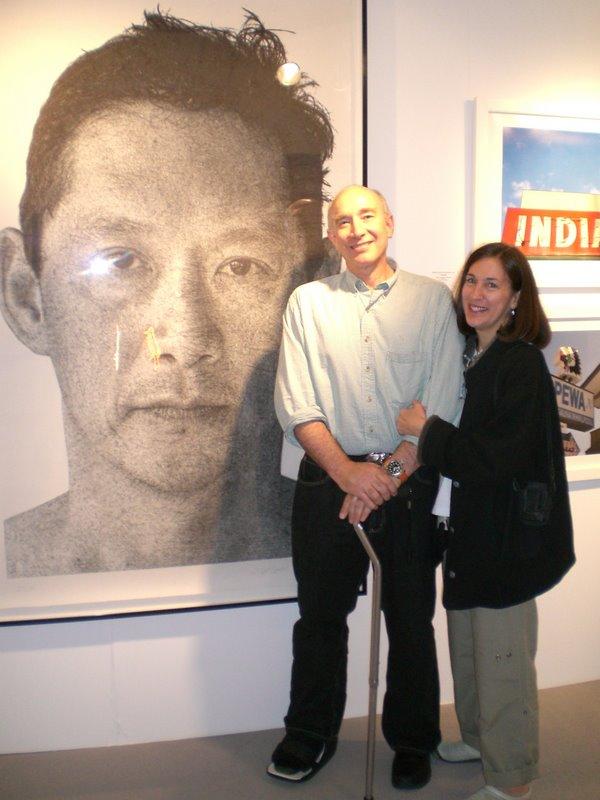 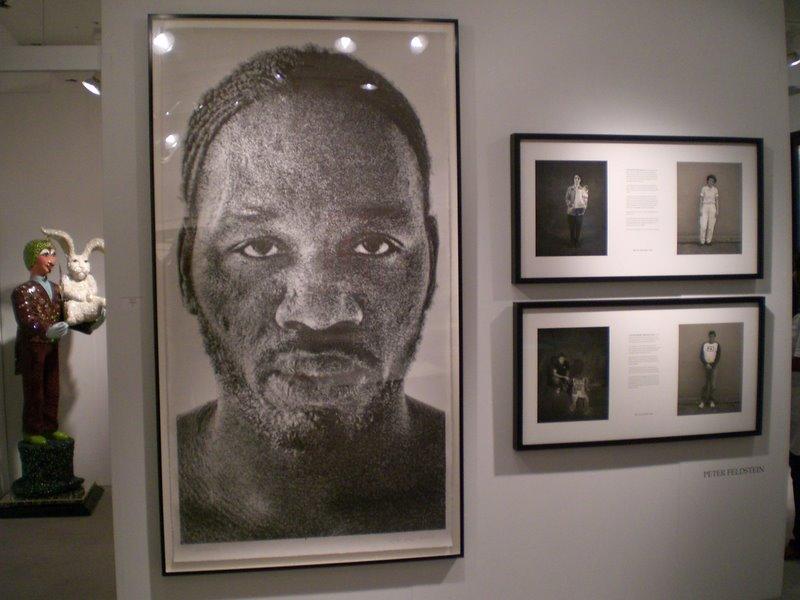 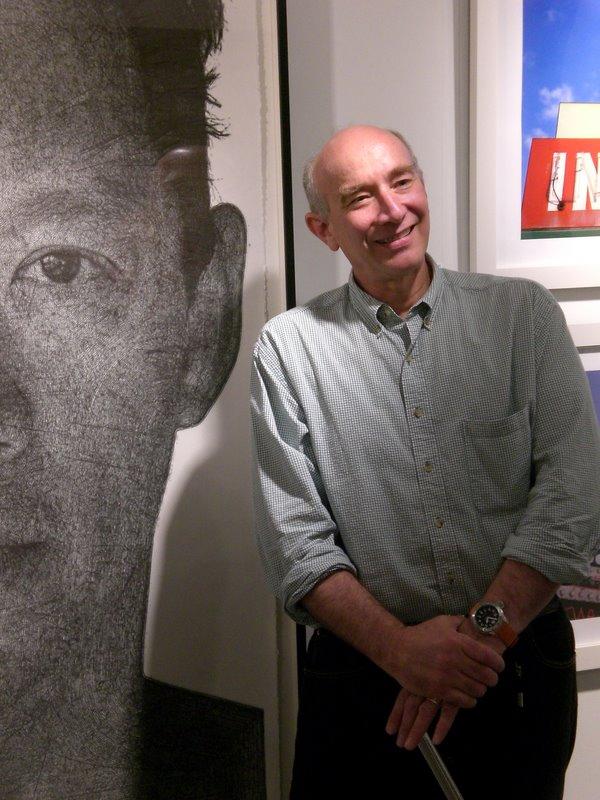 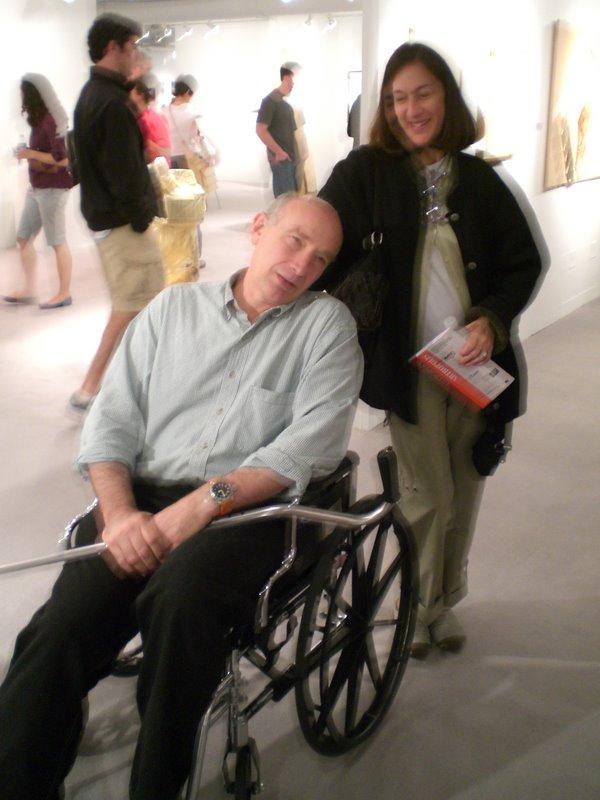 Mike Lyon after an exhausting tour of Art Chicago ;-) Don't miss the Art Chicago 2007 photo gallery, click here and some short video clips that describe Artropolis and it's many shows.
Posted by Julio at 2:28 PM No comments: Links to this post

Greetings all, My name is Berndt Savig and I was introduced to the Baren Forum by Paul de Jode. Presently I am an assistant professor in art and am planning on becoming more involved in printmaking when school lets out this next month. I have enjoyed viewing the prints and looking at some of the forum discussions, though I have yet to figure out how to join them... I am wondering if there is anyone who would be interested in a four or five day camping/printmaking get together in Colorado? Just throwing it out there as a possibility. There would be room to work on prints, but tents would be necessary for sleeping accomodations.

Posted by Julio at 12:40 PM No comments: Links to this post

"99¢ Store Miracles” New Works on Paper by Sarah Hauser
Manhattan Graphics Center 481 Washington Street between Canal and Spring Street New York, NY 10013 (212) 219-8783
Dates of Exhibition: May 1 - 31, 2007 Reception: Sat. May 5, 6-8pm Hours: Tues-Friday 10am-10pm Saturday and Sunday, 10am-6pm
As a child, I always loved the 5 and 10¢ stores and....
with each trip would wonder what little treasure I would find there. That fascination has continued through the years, and has evolved into my current series of works on paper, “99¢ Store Miracles”. The inspiration and “models” for these works are toys which I purchased at 99¢ stores. I set them up in ever-changing miniature landscapes in my studio. I work with a variety of media, constantly finding new ways to combine them. For this exhibition, I have been working with printmaking and drawing media in combination with gouache, inks and metallic paints. Best wishes Sarah Hauser
Posted by Julio at 9:27 AM No comments: Links to this post