Hello all, Here is a woodcut I did as a wedding gift for the 2 folks pictured. I gave them an edition of 12 figuring that they could then give them to friends and family. So thats 12 of my prints out in the world and 0 in my drawer (except 2 APs, just in case) - usually it's the other way around! Size is about 9"x12".

Posted by Julio at 2:45 AM No comments: Links to this post

I've recently returned from Norwalk, Connecticut's Center for Contemporary Printmaking where I taught another five-day Japanese Printmaking workshop, my fourth at CCP. This was the smallest group to date, only four students, but all accomplished artists in other media. 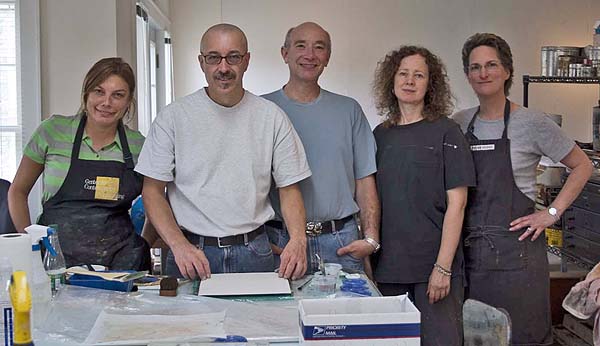 The CCP September, 2005 group -- Natasha, Roger, Mike (me), Nash, & Judy
I always try to 'adapt' the traditional Japanese techniques to each student's interest and work methods while encouraging them to work to an easy scale with multiple over-lapping block designs. This group was unusually receptive and quick to grasp everything I had to offer, and I think everyone enjoyed the experience and several will surely continue to print moku-hanga, incorporating their new skills into their ongoing work... What a ball! Here are some more photos: 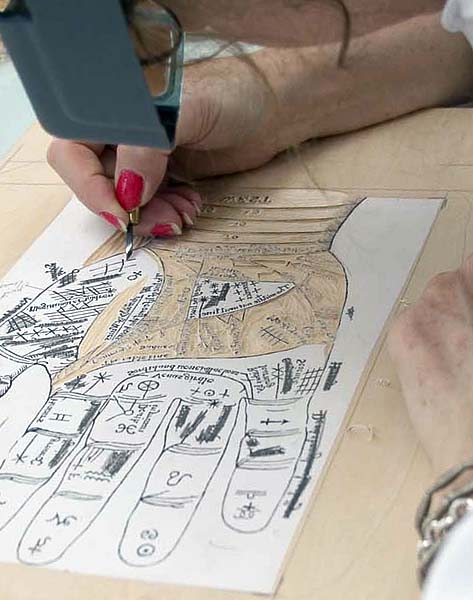 Nash brought in a photocopy of an old Palmistry chart -- all thin lines and tiny lettering. We registered it to her kento (which she had already carved into the narrow side of her blocks -- not recommended!) and pasted the photocopier bond paper to the block using rice paste -- brushed the paste thinly onto the block and tapped it up into little tacky peaks, then positioned the sheet carefully and pressed it down flat and smooth with the printed side up (as the photocopy was already reversed during copying). An hour later I demonstrated carving techniques, outlining and relieving each line to be printed, then clearing with small gouges, etc. Nash worked on the block part of two days, and I assisted with additional carving during a long evening to complete it. 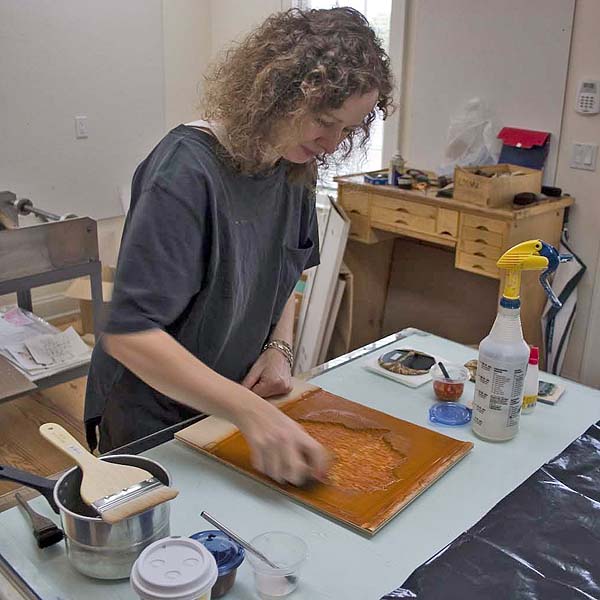 Nash inking up her Africa block 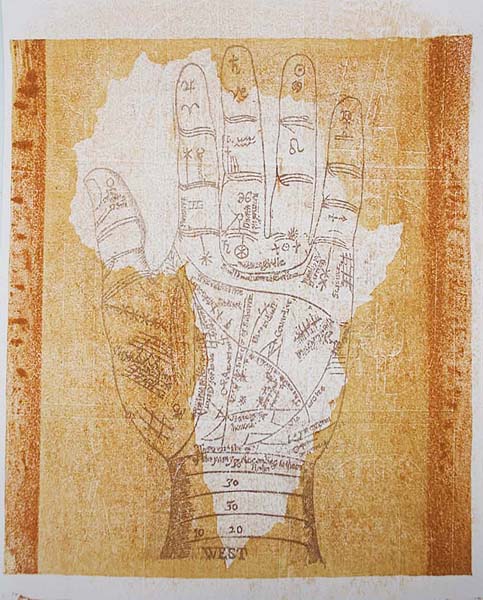 One of Nash's prints using the two blocks pictured above. 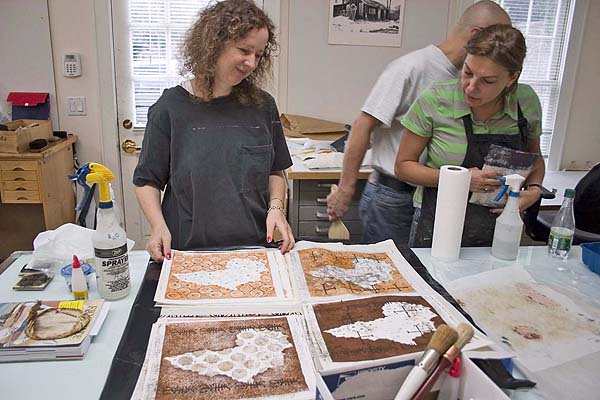 more examples of Nash's prints -- these incorporated some collagraphed blocks -- cardboard with wood and other materials glued on, then sealed with acrylic medium.

I don't mean to monopolize the workshop report with Nash's prints -- these were just the first photos I 'grabbed' for viewing. Everyone did notable work, actually.

Judy, for example, brought in a lot of brush and ink figure studies and wanted to reproduce them in prints similar to the figurative work I've been showing in recent years. She separated the tones by hand, working long and quiet hours drawing contours, then carving several blocks and finally printing them by patiently building up subtle color layers and gradations. 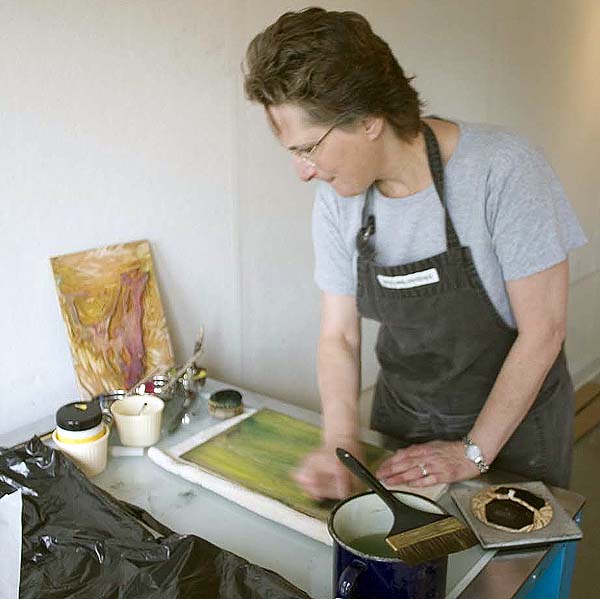 This is Judy, brushing up one of her blocks. 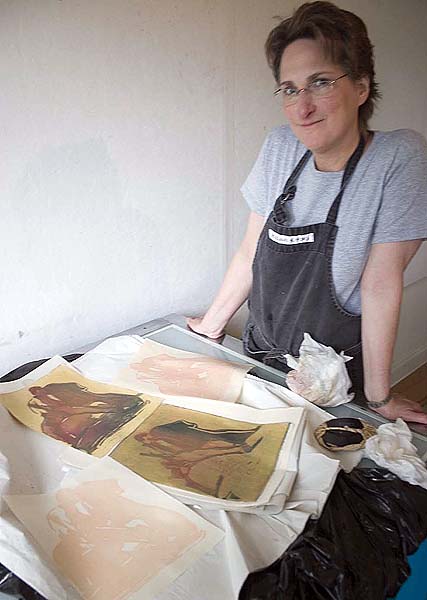 and here she shows off several of her prints in progress.

Natasha is a big fan of Miro and her own paintings and monotypes are abstract and somewhat Miro-like (seemed to me). She attempted to make something like her usual imagery by figuring out shapes and colors in advance, then carving the blocks and printing. I think she was a little frustrated that the blocks 'locked her in' to the already defined and carved shapes, and she didn't feel she had time for more carving, so she experimented with monoprinting the blocks and obtained some interesting prints, I thought. 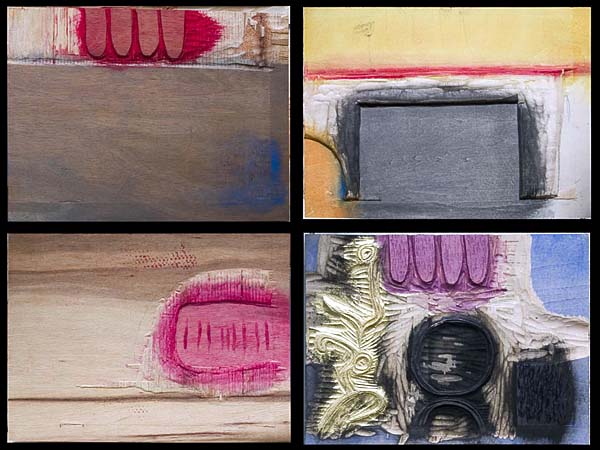 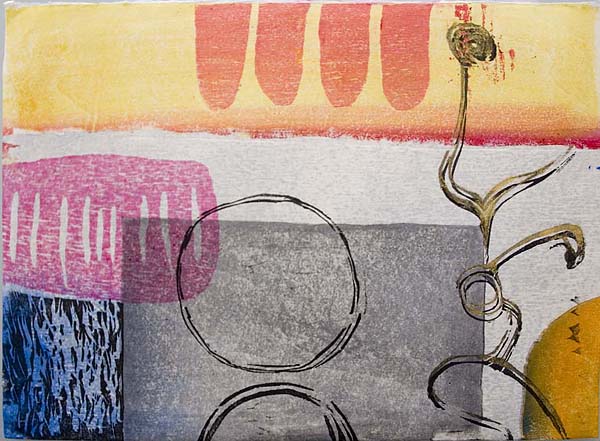 an example of the print Natasha more or less intended -- this one has some metallic gold printing from one of my demos which she did not intend :-) 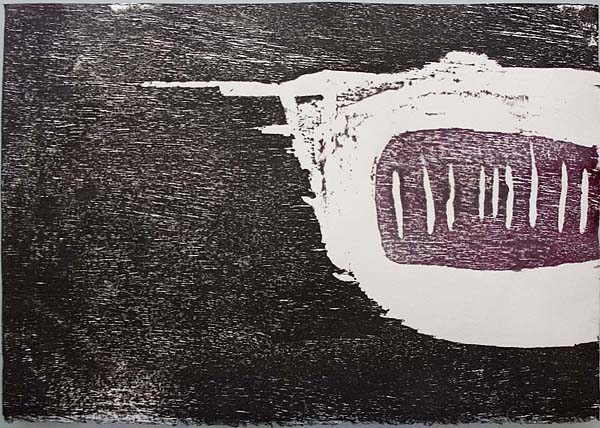 One of Natasha's monoprints -- this pulled in two printings from a single block.

Roger has been making abstract paintings over gold leafed paper -- he sizes the paper, then very patiently and slowly builds up thin layers of lightly pigmented acrylic varnish, brushing the pigment into roundish patterns. 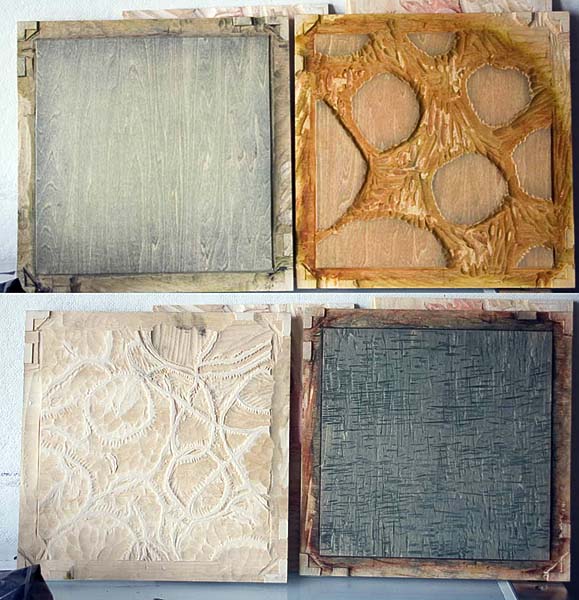 Roger carved his square block designs with a set of kento on each of the four sides so print papers could be rotated over the blocks to build imagery similar to his paining.

I suggested that Roger try preparing some printing papers with metallic leaf and then try building up paste and pigment onto the metallic and non-absorbant surface. 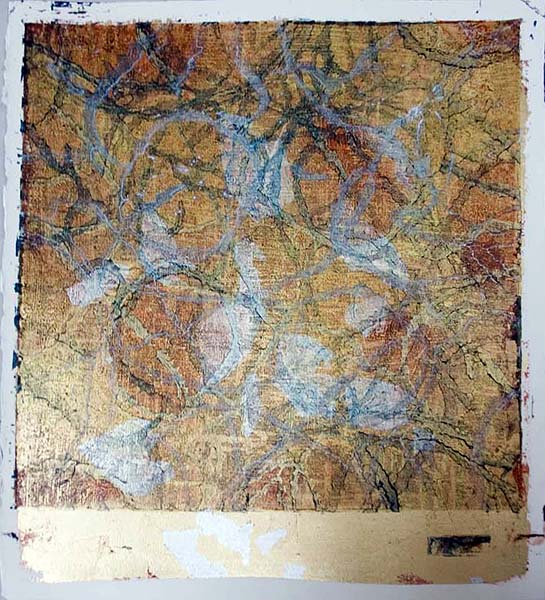 One example of Roger's hanga over gold leaf

Both his conventional prints and his leafy prints (as he obtained results over the leaf which he liked, he 'sealed' them with acrylic medium, then built more onto the medium, and so on working with small changes and thin color layers. I liked his prints a lot. 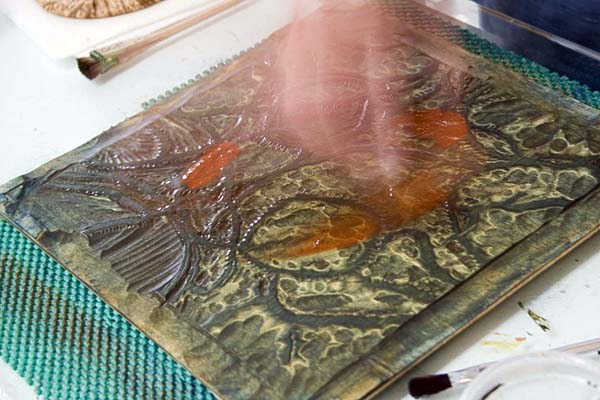 Here Roger brushes up one of his blocks 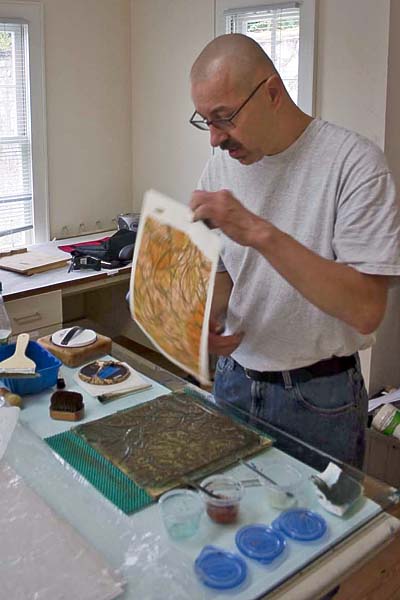 ...and pulls a print 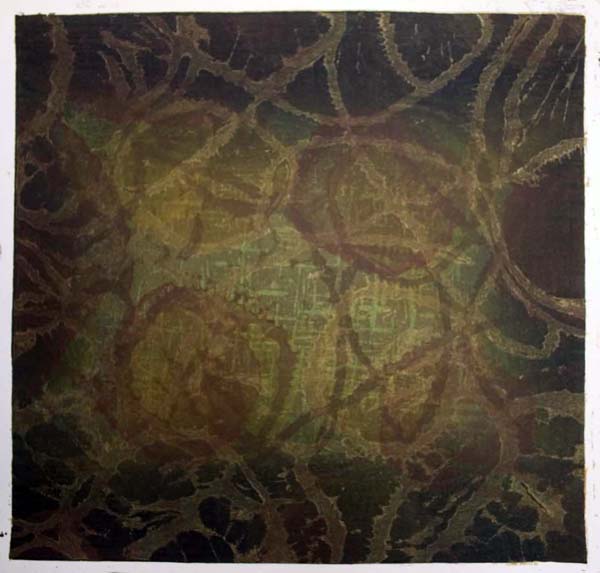 One of Roger's more conventional prints

In the print above, I'd demonstrated bokashi printing using sumi -- Rogers subsequent printing lifted some of the sumi creating an interesting reversal.

So, it was a great experience and we all learned a ton! So much fun -- I'm already looking forward to next time!

Posted by Julio at 9:28 AM No comments: Links to this post

Posted by : Gilda Machado www.gemz@earthlink.net
I wanted to share some prints that are currently up at the:
The Kirk Theater, Theatre Row 410 West 42 Street New York, New York
This show is presented by "INTAR Theatre" and is in conjuction with a play written by my brother Eduardo Machado titled "Kissing Fidel"
The prints can be viewed before and during each show in the Lobby and Lounge on the second floor. show hours can be view at www.theatrerow.org
Here are a few of the prints for sale and on view in New York.
Eduardo (image size: 10" x 8") 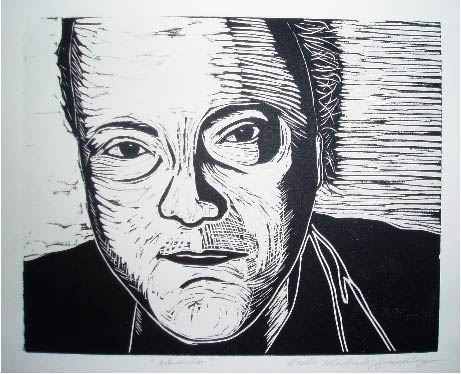 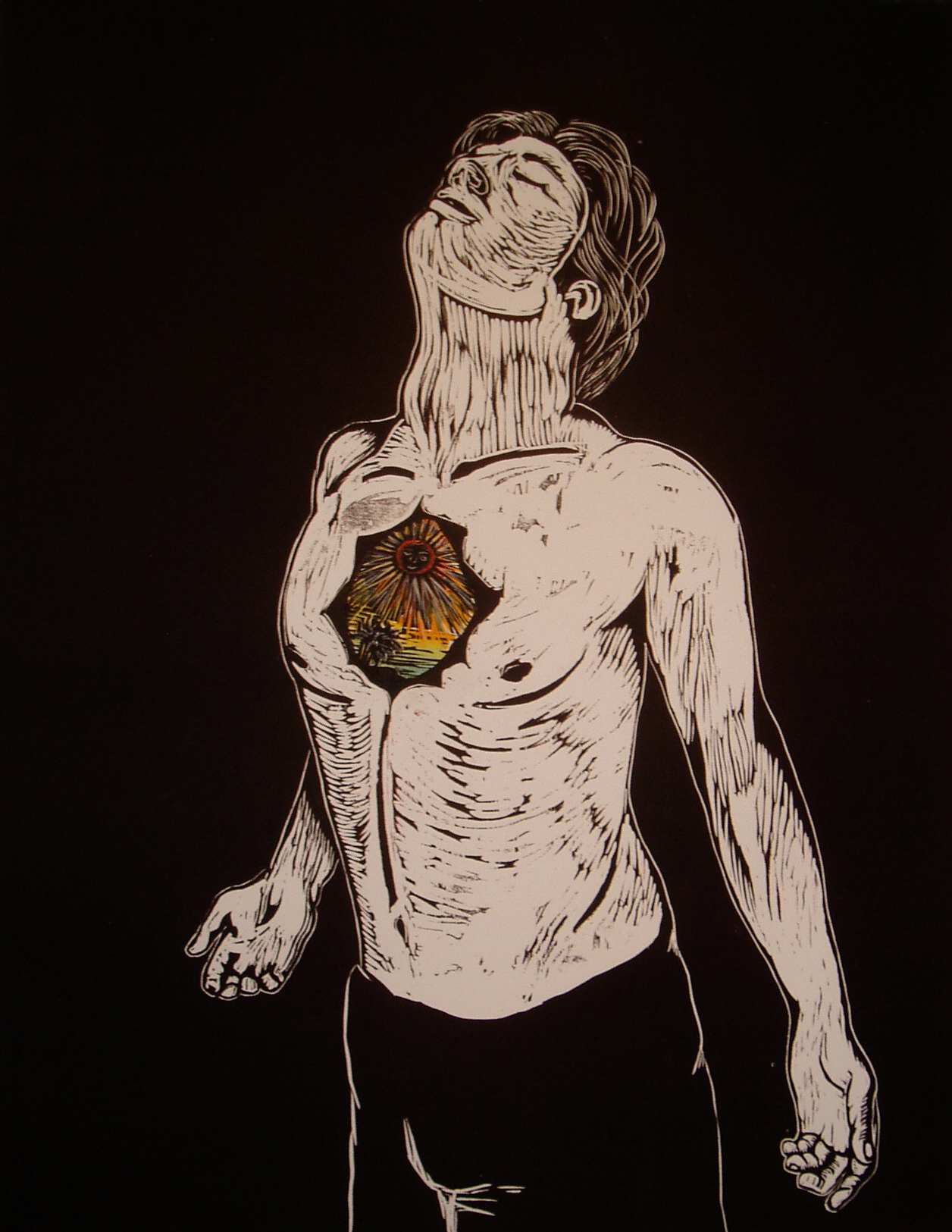 Chest were ripped open, when time stood still, in the hearts of our father's, the past does not die.
La Espanola (image size: 24" x 22") 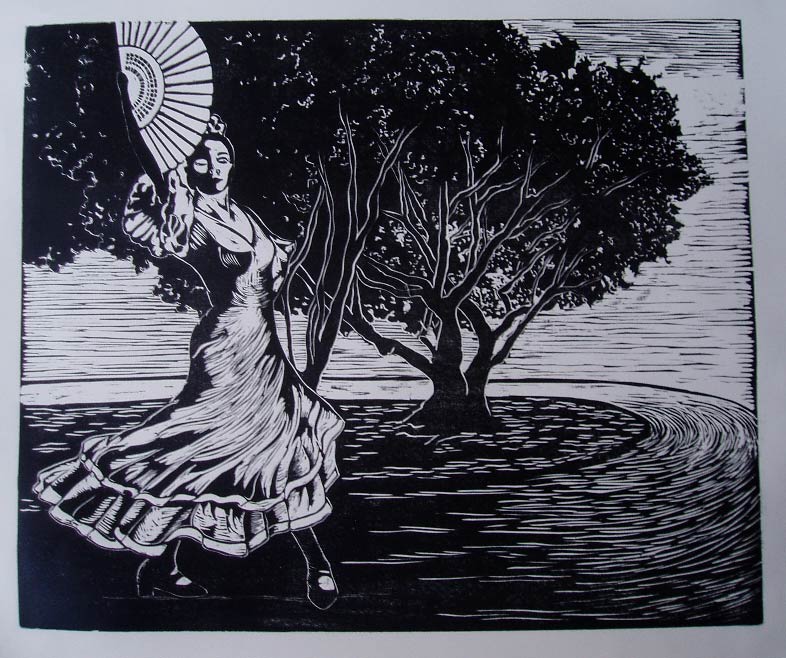 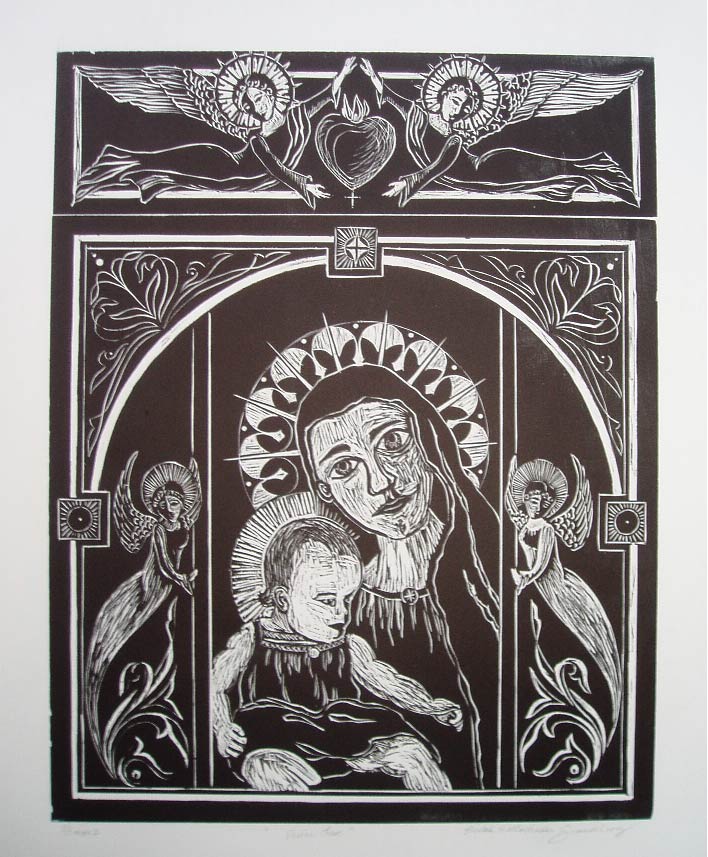 Posted by Julio at 8:32 AM No comments: Links to this post

Kansas printmaker Gary Luedke has just opened up his new website, featuring his 'Prints of Hawaii'.
http://printsofhawaii.com/index.html
There are two kinds of prints on the site: - woodblock prints cut and printed to his designs by hired craftsmen (in Japan and America), and - digital prints produced by Gary on his own equipment.
Here's one of the digital designs:

And here's one of the woodblocks:

Lots more on the site ... please take a visit! I'm sure he would appreciate hearing your comments about his work ...