Here is more information about the Puzzle Project. The two sheets of prints are now in the NYC 5th Ave. Public Library Print Room, The first photo shows information to the left, quotes from David Bull and Maria. Below the prints are the statements made by the printers whose prints are on the bottom row. The colored string connects the statements to the corresponding print. The second photo shows a lady who was very interested in reading everything. She appreciated and learned a lot she told me. 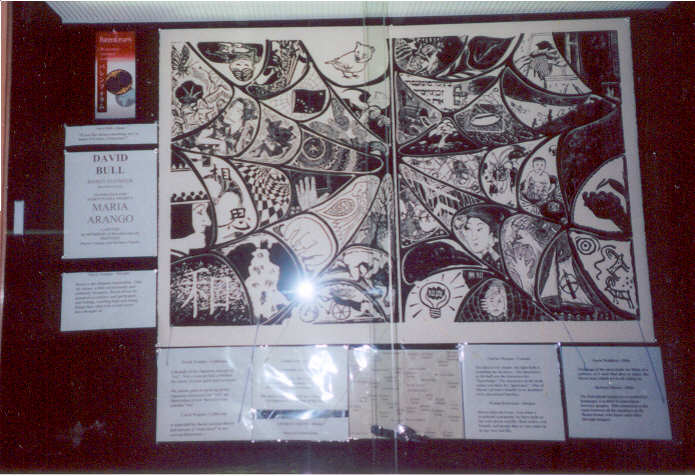 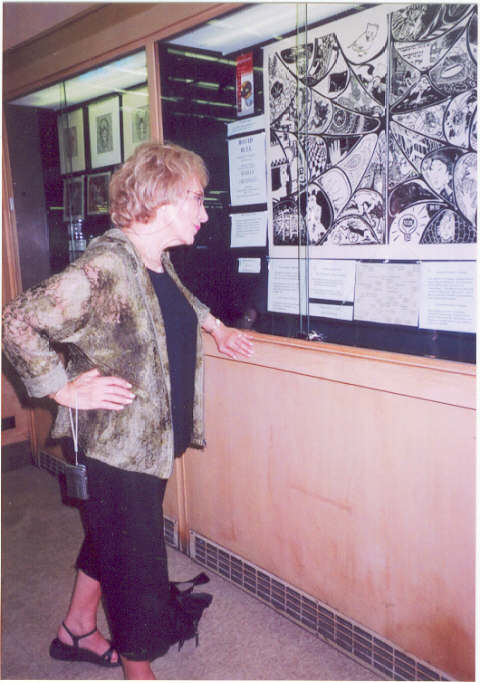 Maria's Puzzle Project has been on exibit at the Donnell Library Center, W. 53 St , Manhattan, July 16-29. It includes the prints of 44 Baren participants. The theme was "What is Baren" It was part of my 6 panel show "Too Advanced for Connecticut II". That provocative title was a jokingly made by a museum curator. The first day of the exhibit two Asian ladies were seen enjoying and closely examining the prints,commenting to each other. I joined them and we had a Q&A. One of them said of Frank Trueba's print, "That's my name in Japanese" That was a nice beginning to the exhibit.
Click on the image for an enlargement... 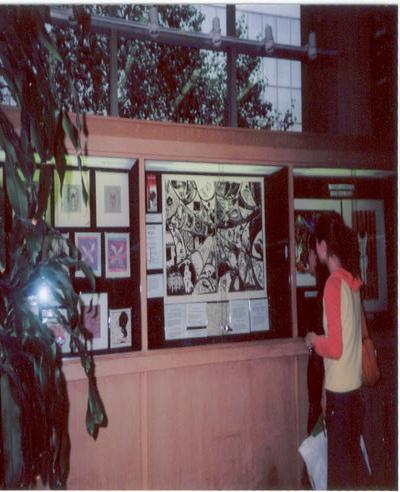 The first of the Rodeo Bulls...

My latest obsession is Rodeo Bulls. I think they are just amazing looking animals. This particular bull reminds me of the Assyrian bull from the Ishtar Gate.
Safety-Kut in pthalo blue on lavender unryu.
Annie F. 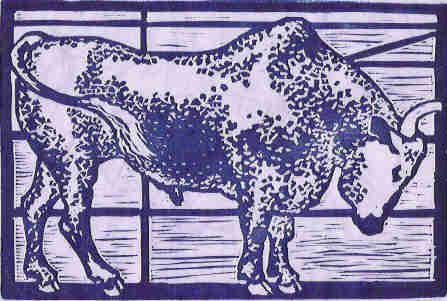 Here are a couple of snapshots from Tuesday's run of the Woodblock Webcam. Special prize to the first person who can identify Dave's special guest this week! 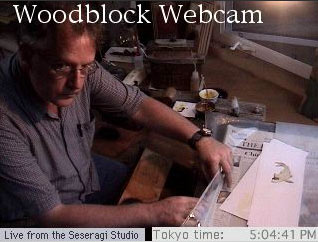 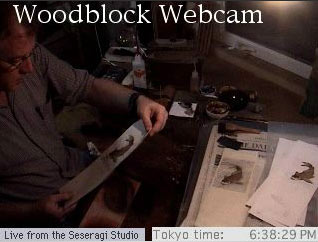 Email ThisBlogThis!Share to TwitterShare to FacebookShare to Pinterest
Labels: Webcams 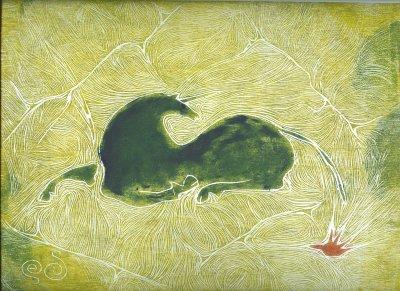 I'm computer literate! Well, at least I'm trainable. ;-> Thanx to Juio I was able to upload this woodcut, another viscosity print. Here I played with a yellow-gold and a dark green, with red for the handprint. Another in my Paleo-Mythos Series of mythical cave beasts.
Ellen Shipley, CA

Hi,
I'm a 53 year old neophite. I stumbled into printmaking while taking art classes at my local community college. Five semesters later, I'm hopelessly hooked. I'm slowly acquiring my own tools and supplies for when they eventually kick me out of the class, and recently I bought a friend's press.
I have a thing for paleo art, and I have a series I call Paleo-Mythos, a series of mythical beasts on cave walls. Paleo-Phoenix is from that series. Here I was experimenting with viscosity inks. (That is, if I've done this right...) 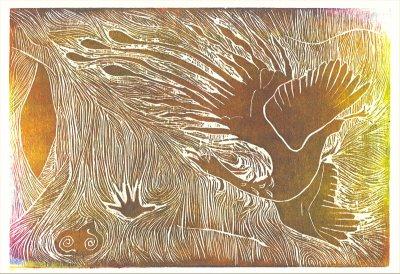 Annie Fitt - a little introduction to my work

All these images are cut from Daniel Smith's Safety-Kut and printed with D. Smith's water-based relief ink on handmade paper (mostly Tibetan Lohkta). I have cropped away the borders to cut down on file size. 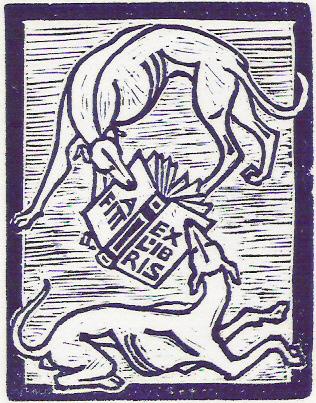 This is a bookplate I did for myself showing two of my most important interests. Books and Whippets are not always a happy mix!
Click on any images below for full-size 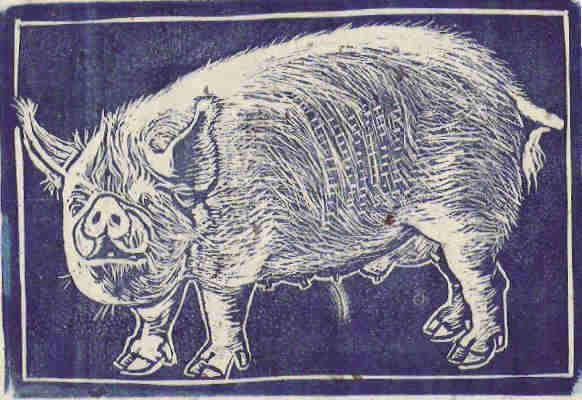 "Middlewhite" from a series of farm animals I have been working on. 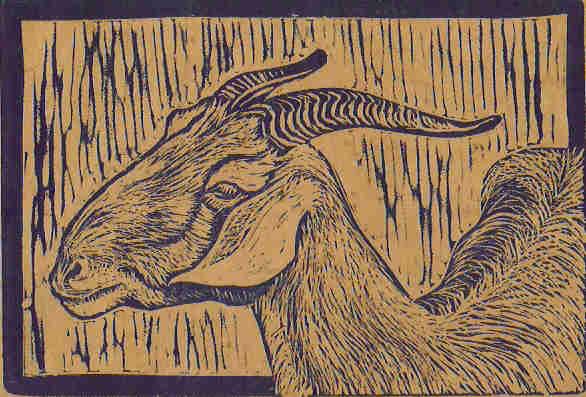 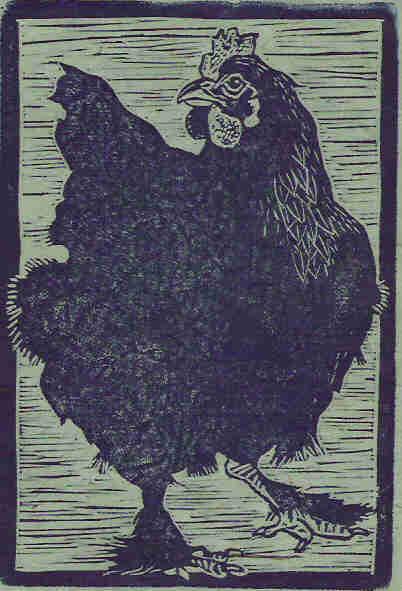 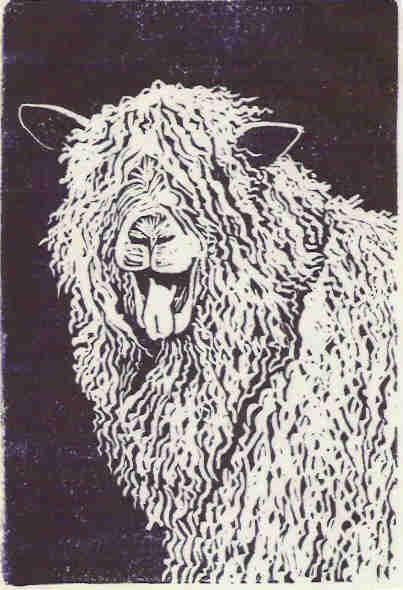 "Leicester Longwool" from my Sheep series. 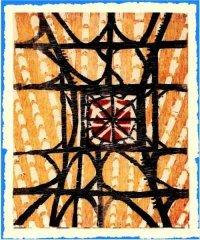 This is the fourth study in a series of the Gainsborough Old Hall in Lincolnshire. I started the series after distributing the Baren leaflets to the Arts Centre and as I left the Arts officer proposed that I hold an exhibition of woodprints. Flabbergasted, I asked what sort of subject matter the patrons were interested in. He implied that they seldom had local studies, so off I went to review this magnificent hall : a meeting place of the Pilgrim Fathers before they left to the New World and where John Wesley preached a sermon to ‘a rude, wild multitude’.
Harry.
Lincoln : UK

Tengu are the crow-headed humanoids often seen in heroic japanese prints. Melinda, a new baren contributer is suggesting Tengu, or other monsters as an Exchange theme. I think it is a great idea! Read more about Tengu here: Wikipedia. Click on the thumbnail to see the Tengu up close!
This print, with a gaggle of Tengu, is described by Eric van den Ing who runs an internet site selling Japanese prints: Saru Gallery. Eric is also co-author of Beauty and Violence, the classic text on Yoshitoshi:
"The Chinese novel Shuihu zhuan (The Water Margin), known in Japanese as Suikoden, tells of the legendary exploits of a group of Chinese brigands during the Northern Song dynasty (1101-26). It was retold in a popular Japanese novel illustrated by Hokusai, and was the subject of Kuniyoshi's first set of warrior prints in 1827. Although the anti-establishment heroes of the original were very popular, in this set Yoshitoshi departed from the novel and made his own selection of Japanese heroes from history and legend. The series was published at an interesting point in Yoshitoshi’s career. Five years earlier, in 1861, his teacher, Utagawa Kuniyoshi, had died, and this series is evidence of his powers as an independent artist. Kuniyoshi’s influence can still be seen, but on the other hand many designs already point to his future greatness. The chûban (“half-size”) prints were printed two to a sheet and then cut."

Hi all! Robin Morris here- Carol Wagner and I collaborated on a print of her neighbor's lovely cat. Carol designed and drew, I carved, we both printed. Enjoy! 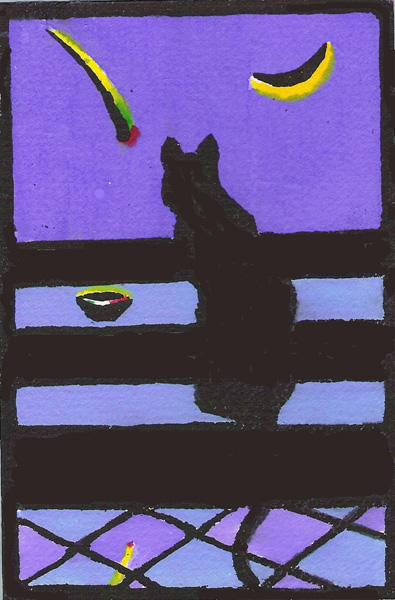 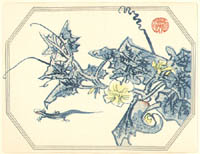 Another beautiful Sosaku Hanga print, this time from Kyoto artist Eiichi Kotozuka (1906-1979). A lizard emerges from under a cucumber vine. Click on the image to see a larger version.
This oban sized print is dated 1936 and belongs to the series; "Hana Goju Dai no Uchi", Fifty Flowers, designed by a number of Kyoto artists and published by Unsodo. The blocks for this print were carved by Kotozuka, but printing may have been arranged by the publisher, who probably kept ownership of the blocks. All prints from this series carry the geometric border and were sold in a presentation folder.
With this series the artists were keen to demonstrate the new expressive Sosaku Hanga techniques. in this print the bare paper of the composition is well suited to feature the organic mottled print textures. To achieve this atenashi effect the block and washi paper are quite damp and the baren is used sparingly. The leaves and tendrils are printed from three blocks using three tones of the same blue-grey ink. The ink has been diluted with water, and printed without any starch. The darkest tones of blue were reprinted to give accent to the linework. The buttery yellow flowers and red highlights give a little extra spark to the design.
Kotozuka went on to do landscapes and more designs of plants. He is probably best known for his bamboo and cherry designs for Uchida, which continue to be reprinted. More designs can be seen if you follow this link:
artelino archives

The City of Henderson Multigenerational Center has honored Maria Arango with a one-woman show this summer.

Carol Lyons is working on a Baren Puzzle Project exhibit. The prints will be shown on a 6 foot locked glass vertical case right next to the library entrance. The library is right across the new Museum of Modern Art.
July 16 - July 28, 2005
Donnell Library Center W.53 St. New York, NY

The get together dinner in Chicago for Barbara Mason's visit is on for Friday night at 7:00pm at Santorini Restaurant in Greek town.
Santorini: 312-829-8820 800 W. Adams St. Chicago, IL
A map and directions are available by clicking here

I would like to share this beautiful little print and try to uncover some of the techniques used in it. If you click on the thumbnail you can see an image that is close to actual size.
The print was issued in 1975 with a small German museum catalogue in an edition of 1000. Hashimoto (1899-93) was 75 and still going strong. He has a free flowing carving style and here he makes his 7 blocks in a rather relaxed manner. Small irregularities remain where they add to the feel of the print. The colours overlap generously. he uses a watery ink, probably without starch, to get his neutral tones. The brown on the temple roof may have been wiped from the block to show the grain of the block. The grey sumi is very soft with a nice ito-bokashi along the bottom of the brick work seen in the white wall. The black ink is printed over the colour in most parts, with only the red partly removed, it also has mica added to give just the occasional glimmer of light. The colour is superbly balanced, with beautiful vibrant shades nestled in with the black.
Any other comments about this print, or the Hashimoto style? Tom

Test to see if we can link Webcams!

Well, Julio connected my Webcam to this blog page, so perhaps there will be a boost in the number of viewers now!

For those new to the Woodblock Webcam, please note that this is not 'real' full-motion video. Although the image is being picked up by a real Sony Handycam, the webcam software is only uploading a snapshot once every eight seconds. When you factor in the time for uploading/re-writing the image file, the most you are going to be able to get is around one new shot every ten seconds or so ... not exactly smooth motion! But for now, at least it should give viewers a feel for the kind of work that I do.

I can mention that just the other day (this is July '05) the installers from NTT arrived at my home and installed an optical-fibre cable for connecting to the net. I'm too buried in work to spend time with it just now, but once I get a chance, I'm going to hunt up some video streaming software and connect it to the camera.

Once that is in place, if you too have a good broadband connection, then the Woodblock Webcam will be giving you a very good view of my work! Please stay tuned ...

Email ThisBlogThis!Share to TwitterShare to FacebookShare to Pinterest
Labels: Webcams

This is going to be so much fun...I am going to try to do a little travelog of my trip to Chicago. I can't wait to see the windy city and all that midwest art work. Also I hope my own exhibit will be successful and I will have sales. After all, that's how we judge ourselves, ultimately. Even if we say it doesn't matter, it does. So stay posted. I leave the 6th for my big trip and will let you all know how it goes..and I love the idea of being able to post photos. Barbara

This item should have with it a scan of a print 200mm x 230mm on cardridge paper of Georg, a cockerel, a legend at the Neustadt market in Holstein, Germany (click to see larger version). 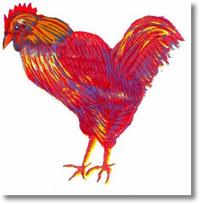